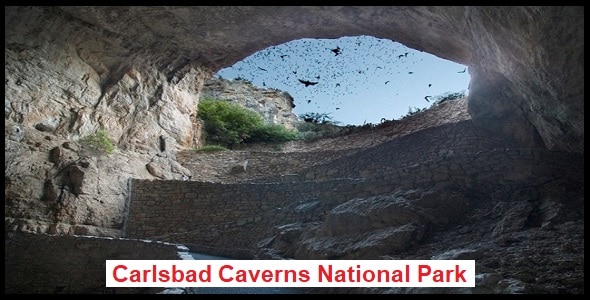 Home to one of the most spectacular systems globally, Carlsbad Caverns National Park is an underground fantasyland that should be on every American’s bucket list.

If you live in New Mexico and haven’t visited this Park yet, you are missing out the most amazing experiences, my friend!

In this guide, we’ll share everything you need to know to plan a memorable trip, including all pertinent information about when to go, where to stay, the best things to do, reservations, and much more. Let’s begin!

Home to one of the most mesmerizing cave systems globally, Carlsbad Park is an incredible destination for history buffs, adventurous travelers, and those seeking a bit of an underground adventure.

Located in Southeastern New Mexico in the Guadalupe Mountains, the underground fantasyland comprises more than 100 known caves, fantastic geological formations, and an abundance of natural marvels that are not to be missed.

Millions of bats call this place home. You can witness a spectacular sight as the bats leave the cave.

Visitors can hike the caverns on their own or take a ranger-guided tour for an even more in-depth experience.

The formation of the Caverns began some 250 million years ago when a vast inland sea covered the Cavern region.

A reef formed after the sea evaporated, leaving the sea covered with deposits of salts and gypsum.

Eventually, a tectonic movement occurred during the late Cenozoic era, uplifting the reef above ground.

In 1898, a teenager named Jim White became one of the few people to explore the cave in-depth with the help of a homemade wire ladder.

He called many of the Cave rooms and prominent formations such as Big Room, Queens Chamber, New Mexico Room, Witch’s Finger, Giant Dome, Totem Pole, and many more.

His photographs attracted much local and national interest to the caves, marking its beginning as a prime tourist attraction.

Things To Do In The Park

This Park offers so much to and sees that you’ll be overwhelmed with the range of choices.

Here are the top five things to do in the Park:

Caverns Cave is the prime attraction of this Park that attracts millions of visitors worldwide.

Multiple chambers feature an abundance of natural marvels in the cave, including “Big Room,” King’s Palace, Lion’s Tail, and the Bottomless Pit.

You can enter the cave via the natural entrance or take an elevator to the wonderland of caves and fantastic geological formations.

The Guadalupe Ridge Trail is one of the most famous hiking trails in the Park that provides hikers and backpackers with true wilderness experience in the Guadalupe Mountains and the Chihuahuan Desert.

The 100 miles trail traverses the rocky peaks of the highest point in the Guadalupe Peak to the challenging mountainous landscape of the Chihuahuan Desert.

Some parts of the trail are more challenging than others, making it more suitable for experienced backpackers.

You can explore the stories of ancient people and their desert survival on a one-hour scenic drive. The drive starts from the entrance drive the back towards the entrance.

Bat flight Program is one of the most memorable natural events to experience at the Caverns.

The Park offers two types of bat watching programs where visitors can watch the free-tailed Brazilian bats fly out from the caves in the evening or fly back.

Brazilian bats are among the fastest flying bats flying at 25 miles per hour.

The programs are held at the Bat Flight Amphitheater located near the Natura entrance of Carlsbad Cavern.

If you are in the mood for a slightly challenging hiking adventure, then Upper Rattlesnake Canyon Trail is highly recommended for you.

The trail features scenic arches and stunning canyons and takes around four hours to finish the trail, depending on your ability and speed.

The Park is a year-round destination and can be visited in any season except summer. Summer is the hottest time, with an average temperature of 100+ being the norm.

August and September are the rainiest months. However, the underground temperature of the caves remains constant at 56°F, so make sure to bring a jacket with you.

Make sure to download and print the Park map displaying all the roads, trails, and entry and exit points to make your visit safer and more enjoyable.

You can find the downloadable version of the map on the NPS website.

There’s no accommodation available inside the Park. However, you can find a range of lodging facilities in the nearby town of Carlsbad to suit different needs and budgets. Here are our top five recommendations for you:

This Park doesn’t have any designated campgrounds. Primitive camping is allowed in the backcountry only, at least a mile from car parking and roads.

The camping permits can be acquired at the visitor center when you arrive and can not be reserved in advance.

This Park is located in the Chihuahuan Desert and has a semiarid climate with generally hot summers and mild winters.

Spring brings mild and windy weather with frequent rain in the summer and early fall. Always check the current climate of the Park before planning a visit to stay safe.

To enter the Park, visitors need to purchase an entrance ticket for $15 per person, suitable for the next 3-days.

You can buy the tickets beforehand or from the entrance upon arrival. Other passes, including America the Beautiful Pass, Annual Pass, and Senior Pass, are acceptable.

Checklist Of Things To Pack

Here are some essentials that must be on your packing list for the Park:

How long does the elevator ride take at Carlsbad Cave

How much time should I Spend in Carlsbad Caverns National Park?

It entirely depends on how you want to spend your time in the Park. We’d recommend spending 2-3 days to have enough time for a cave tour and some hiking.

What time is ideal to see the bats coming out of Carlsbad Cavern?

The ideal time to see the bats coming out of the Carlsbad Caverns is 28-minutes past sunset, known as Civil Twilight, and return between 4-6 AM at dawn.