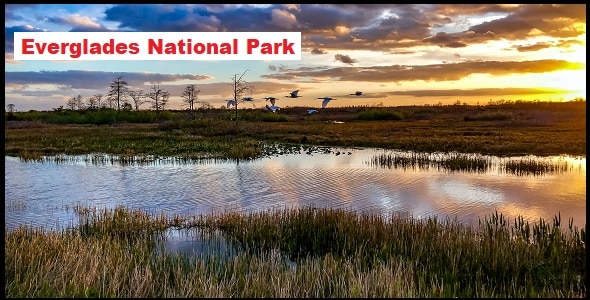 Everglades National Park is America’s third-largest national park and the largest subtropical wilderness in the United States created to protect the threatened ecosystems.

With hundreds of things to do and see in Everglades, it can be difficult to choose only a few for your trip.

Located at the Southern end of Florida, the Everglades National Park is one of the world’s most diverse ecosystems and is an international treasure.

The Park was declared a Biosphere Reserved in 1976, and also has been a UNESCO World Heritage Site since 1979.

Millions of people from all around the globe visit the park every year for its fascinating landscapes.

Covering more than 1.5 million acres of land, Everglades National Park protects an unparalleled landscape and provides habitat for thirty-six of the world’s rarest creatures and endangered species such as the American crocodile, Florida panther, and manatee.

Humans have lived for thousands of years in and around the Everglades and struggled with the watery landscape to make it their home.

In 1882, plans arose to drain the wetlands and develop the land for agriculture and residential use.

For the early colonial settlers and developers in the 20the century, the Everglades were potential farmland, and ecosystems were heavily suffered from human activity.

In the early 1900s, the drainage process to transform wetland into ready land was underway, which could be severely destructive to the ecosystems and the species is supported.

Many scientists, conservationists, and politicians advocated the idea of establishing a national park in the area to protect the Everglades.

Finally, their efforts paid off and Everglades National Park was established in 1947 to preserve the ecosystem and natural landscape in the area.

Things to in Everglades National Park

Here are a few must-do things on your first visit to the Everglades National Park:

A self-guided trail in the small forest of gumbo Limbo tress is the best way to see the hardwood hammock ecosystem plus it will be your first introduction to the gumbo limbo tree also known as the tourist tree because its skin peels off after a sunburn resembling a tourist skin.

The trail is a 0.4-mile loop, accessible from the Royal Palm visitor center, and provides an excellent chance to experience the distinct part of the Everglades.

You can take a quiet walk through the dense vegetation and enjoy some peace and solitude.

Shark Valley is hands down one of the best places in the Everglades National Park to see wildlife.

Here you can spot alligators, turtles, snakes, birds, and another wildlife park has to offer.

Shark Valley is part of a freshwater ecosystem with incredible biodiversity and animals here are so used to the presence of tourists that you’ll have to practically jump on one to get some reaction.

Being in the shark valley is just like being in a zoo with no cages.

No trip to Everglades National Park is complete without an exciting airboat ride! It is one the fastest ways to see the park and a thrilling experience you won’t forget in years.

Airboat rides have been one of the most popular attractions among the tourists as they are the only way to get out in the heart of the Everglades, the river of grass.

Airboat tours are conducted on eco-friendly boats so they don’t disturb the environment or the special habitat of animals.

The airboat ride is perfect for people of all ages who will take you to areas where bigger boats can’t go.

It offers some of the most beautiful coastal scenery, Florida has to offer, but due to its remote location, it is one of the least-explored places in Everglades National Park.

The Gulf of Mexico also offers a wide selection of wildlife than other parts of the Everglades so while you’re at it, look for the bottlenose dolphins, manatees, and crocodiles.

A boat tour of the ten thousand islands is a must-do for the visitors.

The best time to visit the Everglades National Park is from December to March because the temperature is cool and dry, ideal to enjoy a plethora of activities, plus it’s the best time to avoid hurricane season.

However, because it’s Florida, expect it to be hot and damp no matter in which season you go.

If you want to visit in summer, be aware that mosquitos are rampant during that time of the year due to daily rain.

Everglades National Park is enormously consisting of over 800 miles of marine waters so it is really important to familiarize yourself with the park’s management zones, navigational channels, campsites, boating zones, and wildlife zones to make your visit more enjoyable.

To aid in your navigation, download the map of Everglades National Park from the official site of nps.gov.

Reservations can be made through Everglades Guest Services and are available on a first-come-first-served basis.

Everglades has two main seasons; wet and dry. From April to October, the weather is super-hot and humid and even short trips can be draining.

The upside is that park is less crowded during these months.

The dry season starts in November and runs through March.

Depending on the time of the year, temperatures can vary greatly from over 80 degrees during the day to 50 degrees once the sun goes down.

There’s no lodging option in the Everglades National Park unless you count your tent as lodging.

However, there are a few accommodations outside the park that are worth considering:

The entry fee is $30 for the private vehicle, $25 for the motorcycle, and $15 for the pedestrian/cyclist, valid for the next seven days from the day of purchase.

You can also purchase the Everglades National Park Annual Pass is $55 for unlimited visits to the park for the next 12 months.

All the entry passes can be purchased online and displayed on the mobile at the fee station.

Here’s a list of essential items you should carry with yourself while visiting the Everglades National Park:

Can I explore the Everglades National Park in one day?

Everglades is one of the biggest parks in the U.S. In one day, you’d only be able to visit a fraction of the park. To explore the park fully, you at least need 2-3 days.

What is the best time to see alligators in Everglades National Park?

The perfect time to spot the alligators is from June to November. Since they are cold-blooded, during these months they came out to take sunbathe to stay warm.

Are there any scenic drives in Everglades National Park?

There are two scenic roads in the Everglades: fast four-lane Alligator Alley, and tow-lane Tamiami Trail which offers several outstanding stops along the way.