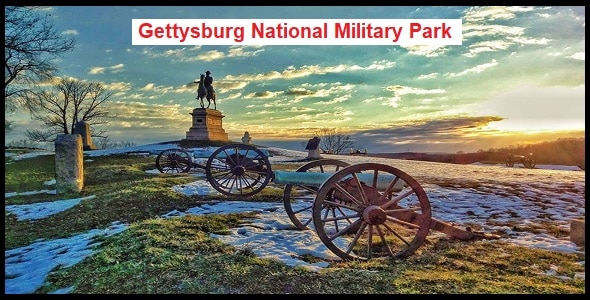 Home to a legendary Civil War battlefield, 13,00 monuments and memorials, and several miles of stunning avenues, Gettysburg National Military Park is the best place to soak up in history.

With various things to see and do, it can be overwhelming to know where to start your trip to this Park.

To make things easier for you, we’ve compiled this travel guide covering everything you need to know about the Park to have the best possible experience. So let’s start!

This Park is a national park located in Gettysburg, Pennsylvania, United States, that protects and interprets the landscape of Gettysburg Battlefield, a site of the critical Civil War battle.

The Park boasts an array of historic buildings, memorials, and miles of stunning avenues that shaped the course of United States history, which makes it a must-visit for history buffs and those with interest in the Civil War.

More than a million people come to the this Park every year to learn more about the Civil War through exhibits, guided tours, and special programs.

The battle of Gettysburg began on July 1, 1863, and continued for three days. By the end of the war, more than 50,000 soldiers were dead, wounded, or missing, and the Civil War continued for two more years.

In 1864, a group of concerned residents established the Gettysburg Battlefield Memorial Association, whose purpose was to preserve portions of the battlefield as a memorial to the soldiers who sacrificed their lives.

In 1895, the association transferred its land holdings to the Federal Government, and 32 years after the deadly battle, This Park was established.

In 1933, the administration of the park was transferred to National Park Service.

Today, it is one of the most visited Civil War Battlefields, visited by more than one million people every year from all around the world.

Things To Do In The Park

Here are the best things to do in this Park that will guarantee a great time in the Park:

Stop At The Visitor Center And Museum

The best way to begin your tour is the Park’s Museum and Visitor Center, where you can get an overview of the Battle of Gettysburg and its context before actually venturing off to the battlefield.

The Visitor Center features a variety of artifacts and exhibits to help visitors get acquainted with the history, including a 30-minute movie, “A New Birth of a Freedom,” “The Cyclorama,” the largest painting in North America painted on the third day of the battle.

This Park’s Battlefield is the major attraction of the Park that draws millions of visitors from all around the globe.

Soldiers National Cemetery was dedicated to honoring the 3,500 soldiers who fought and perished here.

It was one of the first national cemeteries that included the graves of the soldiers fallen in later wars.

The first monument was erected in 1869, honoring the first Minnesota Infantry, which suffered staggering casualties here on July 2, 1863.

If you’re interested in the life of the former president Abraham Lincoln or want to learn how Gettysburg recovered after the battle, then a visit to David Wills House is a must.

Once home to David Wills, this building is where the president stayed during his visit and finalized his famous “Gettysburg Address.”

Other features of the David Wills House include a seven-gallery interactive museum that depicts the life of Wills and Lincoln. The Museum opens daily from 10 a.m. to 5 p.m.

Eisenhower is the only historic site in the Park that doesn’t concern the famous battle.

Home to President and Mrs. Dwight D. Eisenhower, the house was used to meet and entertain the foreign dignitaries.

The house is still furnished as it used to be in the 1950s and features a collection of Eisenhower’s paintings, white house artifacts, and gifts from foreign guests.

Though there’s no wrong time to visit this Park, we’d recommend visiting the Park during Spring and Fall, when the weather is mild, and the Park is less crowded.

Summer months bring the most crowds, especially in July during the battle’s anniversary.

Winter months offer the opportunity to ride the climate control bus, while fall brings the cooler temperature and thinners crowds.

Download the Map of this Park from NPS Website to get an idea of how things are laid out in and around the Park to have a great experience on your first trip.

You can camp both inside and outside of the Park. Tent camping is available only at the McMillan Woods area of the Park from April to October.

There are a wide range of amenities in the campsites and must be reserved in advance; walk-ins are not permitted. You can make reservations at Recreation.gov.

This Park has very predictable weather, and it’s partly cloudy throughout the year. Summers days are warm with lots of humidity, while Winters are cold with occasional snow.

The average temperature typically varies from 24°F to 86°F and rarely comes down below 11°F or above 94°F.

In terms of weather, the best time to visit the Park is from early June to late September. Check out the current weather at the NPS website before visiting.

There are plenty of lodging options within this Park and its vicinity equipped with modern amenities.

Here are some places to stay near the Park:

There is no entrance fee to visit the Park, National Cemetery, and Park buildings.

However, you can access specific areas like Museum, Film and Cyclorama program, and Visitor Center Exhibition, visitors are charged an entrance fee.

Checklist For Things To Pack

Listed below are the few essential items you must bring with you while visiting the Park:

Is Gettysburg National Military Park worth a Visit?

If you are interested in Civil War history, then yes, it is worth it. But if you are more into stunning landscapes, wildlife, or outdoor hiking adventures, you might want to skip it.

How much time do I need in Gettysburg National Military Park?

Park can be quickly done in 2-3 hours max. But if you want an in-depth experience and plan to explore the battlefield without a tour guide, it could take up to 7-8 hours.

Where Should I Begin my Visit to Gettysburg National Military Park?

The best way to start your visit is from the Museum and Visitor Center and watch the film “A new birth of freedom” to learn about the battleground and understand its causes.