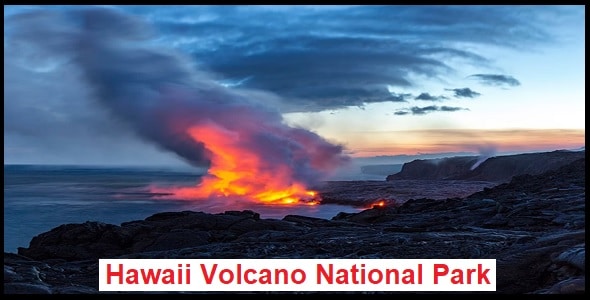 Home to the two of the world’s most active volcanoes, Hawaii Volcano National Park is one of the unique national parks in the United States shaped by fiery volcanoes.

If you plan to visit the Hawaii Big Island, spending a day in Hawaii Volcanoes National Park should be on your itinerary.

In this travel guide, we’ll share the best things to do in the Park, including the tips on the best time to visit, where to stay, what to pack, and much more to help you stay safe and comfortable. So make sure to read till the end!

This Park is one of the most visited national parks in the United States that hold two active volcanoes (Kilauea and Mauna Loa) worldwide.

Located on the Island of Hawaii in the remote south pacific, the Park features petroglyphs, lava tubes, hot springs, wildlife, and more.

The Park is designated as the Hawaii Volcanoes Wilderness Area offering an exciting variety of outdoor adventures. You can walk on the active volcano floor and watch the land forming.

More than 1.4 million visitors come to this Park every year to enjoy sweeping ocean panoramas, incredible lava caverns, lush tropical vegetation, and so much more.

Hawai’i Volcanoes National Park was initially established on August 1, 1916, as Hawaii National Park to protect and study the Kilauea and Mauna Loa Volcanoes. Later, the Park was split, and Haleakala National Park also included it.

The Park was designated an International Biosphere Reserve in 1981 and a World Heritage Site in 1987 to recognize its unique landscape, dramatic beauty, and geothermal features.

Best things to do

Kilauea Crater is one of the most prominent features of this Park that draws tourists worldwide to see the plume of gas by day and the burning lava in the crater at night.

Walking on the hardened surface, which was once a boiling lava lake is one its kind experience that will stay with your forever.

Kilauea Crater overlook offers one of the most dramatic views of Kilauea Caldera and Halema’uma’u Crater. You can hike out to the hike to the lava flow to take a ranger guide hike.

Drive the Chain of Craters Road

The Chain of Craters Road is one of the most scenic drives not just in this Park but also in all of Hawaii, filled with spectacular overlooks and heavenly vistas.

This 19-mile scenic road begins at Crater Rim Drive and winds its way down to the Coast.

You’ll get past several impressive volcanic features and get to see some sweeping views trails of recent lava flows and the brand-new land that Kilauea has formed.

Mauna Loa Lookout is one of the gorgeous viewpoints in the Park that overlooks the Kilauea Crater below and provides some of the most dramatic views in the entire Park.

It also serves as a trailhead for hikers looking to summit one of the largest volcanoes on earth, Mauna Loa.

As you ascend the overlook, you’ll be surrounded by colorful tropical birds and lush tropical foliage.

If possible, visit the lookout around sunset, and you’ll be amazed to see the beautiful colors sweep across the landscape below.

The Thurston Lave Tube is a 500-year-old lava tube located near the Kilauea Crater.

It is open from one end, allowing visitors to walk through it and experience one of the most impressive sights.

The tube was carved out by 2000F lava flow, creating the current subterranean cavern.

The tube length is around 600 ft, with the ceiling reaching the height of 20 feet, providing enough room to walk through the tube.

The hike to Lave tube is around one mile and takes 2-3 hours to complete.

This beautiful 90 ft arch was created around 550 years ago by lave flow is one of the main attractions in this Park.

The arch is made of basalt and extends from the cliff into the ocean like an elephant trunk.

The lava that created the Holei Arch came from Kane Nui O Hamo, a shield volcano to the northwest.

The arch is being continuously washed by the waves and is expected to disappear soon.

Yosemite National Park – Everything You Need To Know

The best time to visit the this Park is November through March when the weather is cold and hiking conditions are optimal.

These months also get the frequent rains but don’t let that stop you from visiting the Park. If you want you beat crowds, April, May, September, and October are the best months to visit.

Download the map of the summit area of Hawaii Volcanoes National Park, which is one of the most popular destinations in the Park.

You can find the map of the complete park area and island in the maps section of the NPS website.

You’ll find plenty of reasonable lodging options near this Park. Here are the top five choices for those seeking upscale accommodation and amenities:

This Park has two drive-in campgrounds and backcountry camping sites.

Both campgrounds have designated campsites with tent pads, fire grills, and picnic tables.

Campgrounds are available on a first-come-first-served basis, hence no reservations are required.

Weather in Hawaii Volcanoes National Park fluctuates based on elevation.

At the Kilauea Summit, the temperature is 12 to 15 degrees cooler than the sea level, and fog and rain are frequent. November through March are the rainiest months of the year.

During April through October, the weather is warm and dry, drawing the highest number of visitors.

Despite its proximity to the Kilauea Volcano, the Park is less impacted by the Sulphur oxide emissions, and prevailing winds keep the air around the Park clean.

The fee to enter this Park is $30 per vehicle, $25 per motorcycle, and $15 per person or bicycle for seven consecutive days.

You can also purchase the Hawai’i Tri-Park Annual Pass and get free access to the Park for next year for just $55.

If you plan to visit more national parks within the next year, it’s better to purchase America the Beautiful Pass, which gives free access to more than 2,000 recreational sites for a one-time fee of $79.

Checklist for Things To Bring

If you’re wondering what to pack for your first trip to this Park, here are some essential items you must bring with you:

How much time do I Need to Explore Hawaii Volcano National Park?

We’d recommend spending at least one day in the Park to explore the park’s main highlights, hike popular trails, and get a taste of camping.

How to get to the Hawaii Volcano National Park?

After landing on the Big Island of Hawaii, you can rent a car from the airport and drive to the Park. It takes around 2 hours from Kona Airport and 40 minutes from the Hilo Airport to reach the Park.

Is there Cell Phone Service in Hawaii Volcanoes National Park?