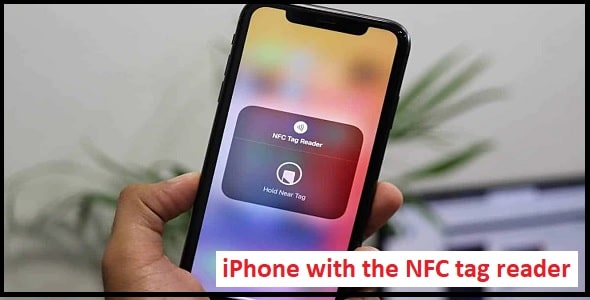 NFC tag reader may sound technically dry, and it can be in several ways. However, its applications are worth considering.

Page Contents show
What Is NFC?
NFC tags?
NFC Compatibility
NFC and iPhone
How to use NFC on the iPhone
Create Shortcuts automation via NFC?
Use an iPhone NFC reader app?
Frequently asked Questions
Which IPhone Models Support NFC Tag Reading?
What Are NFC Tags?
How Does NFC Technology Operate?

Android phones have had access to NFC for many years, but iPhone’s features were limited in the earlier versions.

But both Android and iOS make contactless payment through wireless technology, some level of automation, and headphone pairing.

NFC is the abbreviation of near-field communication. This technology is used to bring about communication between 2 devices that are physically close to each other.

This technology can operate at a distance of almost 1.5 inches apart. However, it can be up to 4 inches. NFC operates in radio technology.

To bring about the data exchange between two devices exactly like Bluetooth technology.

This technology requires proximity between the transmitter and receiver. Hence it is secure and is not vulnerable to getting spied out.

However, with technology, only a small amount of data written on electronic tags can be transferred.

These electronic tags are in the form of small stickers with an NFC chip containing different kinds of information and are known as NFC tags.

The near field communication comes in 2 forms

When you do the shopping and make contactless payments, these transactions are facilitated through NFC.

Hence when you pay through Google pay or Apple pay, the transaction is initiated by NFC. in such a case, the interaction takes place between a smartphone device and a readable NFC tag.

The NFC tags are small and un-powered, generally powered by the radio frequency of the NFC tag reader smartphone device.

A smartphone reading device generates radio frequency through which an NFC tag is powered, making the transaction possible.

Android devices are compatible with the NFC tag reading. However, there was no such compatibility in the early iPhone devices.

But, after introducing the Apple Pay feature, which is a contactless payment method and is made possible by the NFC wireless tag reading technology, iPhone started including wireless chips on their devices.

iPhone limited its NFC technology application to Apple Pay before iOS 11. The newer iPhone models, including iOS 13 and above, support contactless payment by reading and writing the NFC tags.

Through this, you can use NFC on your Android and iOS. However, the specifications of android devices vary from each other.

Hence there can be no guaranteed claim that all Android allows NFC.

Now every new model of iPhone features NFC compatibility, though many users still don’t know what NFC is and how to use it.

Smartphone devices have been NFC enabled since 2008, but Apple started equipping all its models with the iPhone 6.

The following models of iPhone bear an NFC chip.

How to use NFC on the iPhone

There are various ways of using the NFC functions, depending on the iPhone model.

Since its iOS 14 models, the NFC tag reader is by default available to all the consumers of iPhone, including those who have at least iPhone 7.

So if you own iPhone 7 or the latest models, you don’t need any third-party app to read the NFC tags for you.

Because you can turn on the NFC tag reader feature by selecting the NFC button, you can see it in the control center.

Then, you need to take your iPhone near some NFC tag to initiate an action.

If you cannot see the NFC button in the control center, you need to add it there for easy access.

For this, you need to perform the following action.

Without even starting the NFC tag reader function, the iPhone starts reading the tag as soon as you turn the iPhone screen on.

It looks for the corresponding signals, and when it detects any, an item notification will pop up on your display screen, motivating the user to open it in the NFC app.

However, since the emergence of iOS 13 and iPhone 7, you can read the NFC tags and write them. The NFC apps allow writing the tags and linking the tags to actions.

Through the shortcut app on the iPhone, you can create automation and trigger them via NFC tag through your iOS 13.

Hence, this provides you with an opportunity to label and execute the NFC and drive actions.

By just bringing your iPhone close to the tag, you can automate playing a song or any other action.

This automation thing works on the following iPhone models.

The older models of the iPhone do not support this NFC-based automation feature.

The NFC automation feature may sound complex at first. However, it’s a very easy task. What you should do is to

Click “NFC” for creating your automation, then hold the iPhone to the NFC sticker and tap the “Scan” button.

After naming the NFC tag, go to the “Next” from the top right corner and tap “add action” to your sticker.

Then, from the suggestion, select the action that you want to get a start as you hold your iPhone close to the sticker, like sending a message, starting a call, or playing music.

Confirm the choice of your required action by tapping on the Done button. Now, you are done creating the NFC-supported automation.

Now you can put your NFC sticker anywhere and get the required action done by bringing your iPhone near it.

Use an iPhone NFC reader app?

The following models of iPhone bear an NFC chip.

What Are NFC Tags?

These electronic tags are in the form of small stickers with an NFC chip containing different kinds of information and are known as NFC tags.

How Does NFC Technology Operate?

NFC operates in radio technology. To bring about the data exchange between two devices exactly like Bluetooth technology.