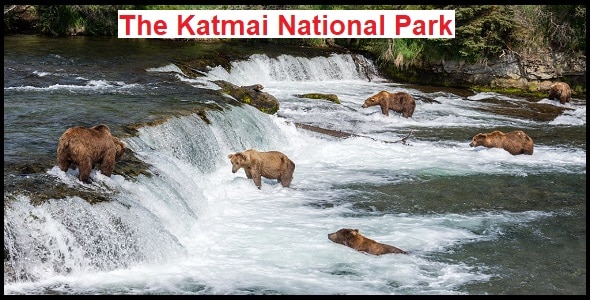 Land of brown bears and volcanoes, Katmai National Park, is rugged, wild, and one of the must-visit destinations to spot for a true wilderness adventure in Alaska.

If you haven’t visited this hidden gem of Alaska yet or planning a trip any time soon, we have got you covered.

In this guide, we’ll share the best thing to do in this Park, including other valuable tips to help you have an unforgettable trip. Let’s get started!

This Park & Preserve is the fourth largest National Park in the United States. Located on the Alaska Peninsula, near Kodiak Island, it is a land of volcanoes and one of the best spots to watch brown bears in their natural habitat.

Over 2,000 brown bears call Katmai their home and can be seen during July and September at Brooks Falls feeding on the Salmon.

The Park also preserves the Valley of Ten Thousand Smokes, the site of the Novarupta eruption in 1912.

In addition to bear viewing and otherworldly volcanic landscape, this Park offer a plethora of outdoor adventures, including paddling, backcountry hiking, fly fishing, and kayaking along the Park’s 400 miles of coastline.

In 1912, the Novarupta Volcano on the Alaska Peninsula violently erupted, leaving the dynamic landscape with ash-covered mountains, small holes and cracks fuming with gas and steam.

In 1918, an explorer Robert Grigg climbed Katmai Pass and discovered the Valley.

The remarkable beauty of the Valley left an unforgettable impression on him, and he named it “The Valley of 10,000 Smokes” and led the effort to turn Katmai into a national Monument.

In 1980, the monument was enlarged to 4.2 million acres, and several historic cabins were built during this area.

During the last half of the twentieth century, tourism increased dramatically, and Katmai became a popular destination for wildlife viewing.

The monument was officially designated as a National Park & Preserve in1980.

Today, Katmai National Park and Preserve is one of the best places to explore wildlife in the undisturbed wilderness.

Things To Do In Katmai National Park

Here are a few must-do things on your first visit to the Katmai Park:

Brooks Falls is one of the main attractions in the Park. Located on the Brooks River, it’s the best spot to watch Salmon leaping up to the falls while brown bears compete with each other for the best fishing spots.

Two viewing platforms near the river give you the best views of the bear-catching Salmon without alarming them.

Also, be aware of bald eagles, seagulls, and even the occasional wolves trying to catch the Salmon.

Containing the desolate remains of the largest volcanic eruption of the 20th century, the Valley of Ten Thousand Smokes is the most scenic and unique destinations in the Park and all of Alaska.

The Valley is 40 square miles wide and is no longer smoking or steaming.

View the pumice-covered landscape, hike to the massive walls of volcanic ash, and enjoy the panoramic views of the Park unlike you have seen before.

This 1.2-mile round trip trail connects the Brooks Camp to the Brook Falls Viewing platform and offers memorable bear sightings.

The trail is flat and accessible for people with ability levels. The hike can be intimidating with frequent bear encounters along its entire length, so visitors must exercise caution and move off the trail to let the bear pass.

There are two raised platforms at the end of the trail to enjoy the bird’s eye view of Brook Falls.

Naknek Lake is the only lake located inside the Park. It is the fifth-largest lake in Alaska and the most extensive national park system.

It is a prime destination for nature lovers for bear viewing, volcanic sightings, fishing, and boating, near the lake located the Brooks Camp, a place known for most bear encounters.

From its stunning scenery to remarkable wildlife, Naknek Lake would be a trip you’ll remember for a long time.

This Park is a popular sport fishing destination. The Brooks Lodge was initially built to accommodate people on fly fishing trips.

Several types of fish, including arctic char, lake trout, rainbow trout, dolly varden, and five species of Pacific Salmon, are found in the rivers and lakes of the Park.

Fishing at Brooks River is catch and release only, and you must have an Alaska State fishing license.

Any time of the year is good to visit the park, however depending on the activities you’re interested in, you can choose when to go.

May to July is the best time to see the newly born bear cubs, after which the salmon run begins and continues for two months.

Mid-September to mid-October is the ideal time to watch the bears lazing around on the beaches.

Voyageurs National Park – Why It’s One Of The Best?

The Park covers more than 4 million acres of land designated with wilderness.

There can be network problems in the Park, so make sure to download the Park’s map from the official NPS website, displaying all the entry and exit points, top attractions to make the most of your time in this Park.

Brooks Camp is the hub of all activities in the Park, featuring a lodge, restaurant, and a campground.

The campground has no designated campsites but a communal area where visitors can camp freely among the bears.

An electric fence surrounds the campground to keep the bears away. Camping spots fill up fast to its best to make your reservations as early as possible.

This Park is located between the Pacific Ocean and the Bering Sea, the stormiest weather region in Alaska, so be prepared for constantly fluctuating weather all year long.

The temperature during summer goes from 30 to 80°F while winters are cold and dry, with an average temperature ranging from 50 to 35°F. Make sure to check out the current weather before your visit.

There are lodges available inside the Park’s premises that offer top-notch accommodation and other recreational activities.

Surrounding communities also provide lodging in the vicinity of Katmai. Here are our top five recommendations:

The Park is open all year round and has no entrance fee. But you need to pay a fee to camp at Brooks Camp.

Checklist Of Things To Bring At Katmai National Park

Here’s a list of clothing, gear, and other essentials you must bring to the Park:

What is the best time to see bears at Katmai National Park?

Though bears can be spotted at any season, the best time to see bears is from late June until September in the food-rich areas throughout Katmai.

How many days do I need to explore the Katmai National Park?

Ideally, three days would give you enough time for bear watching, hike to the Valley of ten thousand Smokes, enjoy fishing, and kayaking in the Brook River.

How many visitors does Katmai National Park receive annually?

Katmai National Park is the 9th least visited national park in the United States, receiving only 84,000 visitors annually.  the article to learn more.