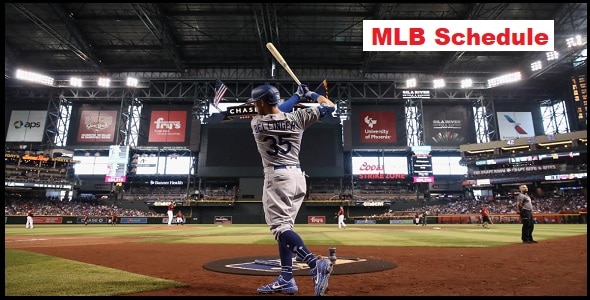 Every season MLB comes with a lot of action for the MLB fans. While there are some fantastic teams and there are some weaker ones too, the MLB schedule is designed to bring all at a competition in equal order. In this way, every team can feel the thrill of the MLB season and so can the fans.

What is MLB Schedule?

MLB is the league played among 2 different leagues. Those two leagues have 3 divisions with 5 teams each. In this way, the team division in MLB is easily done and it helps in setting matches up.

Now that the teams are divided a proper road map is needed so that each of the teams plays its matches without any type of conflicts with other teams.

For this, a Schedule is created that divides an equal number of games between every team.

How is the MLB Schedule created?

It is a tricky thing as every year a new schedule is created. Every team comes up for a new season with different team stats, so it is necessary that the Schedule made is fair enough.

So, the schedule has to be made for each of the MLB teams playing 162 games in the season.

There is a formula that contains the following components for designing the schedule:

By keeping these components in consideration, the schedule is created for a predetermined amount of games for every team to play against each other team.

MLB Schedule for the same division

So, the schedule-making process starts from making the schedule for the same division games. Here each of the teams has to play the other 4 teams in their division.

There are 19 games with each team which makes a total of 76 games for each team within the division. It means that out of those 162 total games per team, 76 will only be played with the teams with the same division.

MLB schedule for the same league

After the 76 games out of the 162 are scheduled for a team, the remaining 86 games are to be played within the league and interleague as well.

So, the next step includes finding scheduling the matches for the team with the teams from other divisions of the same league.

With 2 other divisions of 5 teams, each means that there will be 10 more teams to play with. However, the schedule is not made this way.

After the games above, 76 and 66 of the total 162 are done which means there are only 20 more games left to be scheduled

As there are 2 leagues in MLB and there are 3 divisions each in a league with 5 teams. Here are all the division-wise teams playing in MLB. As there are 15 teams and 20 games left, the following factors are taken into consideration:

The games between geographical rivals are only 4 out of 20. These are also among 22 out of 30 teams. On the other hand, the remaining 8 teams play 2 games(4 teams from each league).

However, these changes of the teams of two divisions draw each other.

In this case, there will be a total of 6 games between each of those teams. The remaining games are selected according to the division rotation done every year.

The following are the teams per division in the American League.

The following are the teams per division in the National League.

The following are all the teams playing in MLB this season.

How to check the MLB Schedule?

Moreover, if you are looking to see the overall schedule that will be available easily as well.

While the MLB matches are full of action, they could get even more interesting if you know all about those games. That you can keep track with the help of the MLB schedule.

You can know all that you need to know about this schedule with the facts shared here.

Who is the manager of Tampa Bay Rays?

Kelvin Cash is the manager of Tampa Bay Rays.

Has Tampa Bay Rays ever won the MLB title?

No, but they appeared as runners-up in the 2020 MLB Schedule final results.