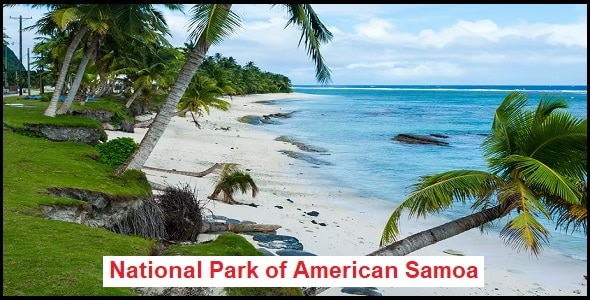 Home to secluded beaches, tropical rainforests, colorful coral reefs, and diverse wildlife, the National Park of American Samoa is the tropical paradise in one of the most far-flung territories in the U.S.

National Park of American Samoa is one of the least-visited national parks in the United States, which sees only a few thousand visitors annually because of its remote location.

But the park is a perfect holiday destination and tropical retreat if it’s the solitude you seek. In this article, we’ll cover everything you must know to plan a trip to this truly magical place. Let’s get started!

About National Park Of American Samoa

The park is one of America’s most gorgeous yet lesser-known national parks.

Located in the heart of the South- Pacific Ocean Islands, American Samoa is genuinely off the beaten path.

Spanning over 9,000 acres, the park is distributed across three islands; Tutuila, Ofu/Olosega, and Ta’u, covered in tropical rainforest.

It is the only national park in the United States, located in the Northern Hemisphere.

It’s currently under the 50 years lease between the U.S government and Samoan people and preserves.

It protects the natural resources, Samoan Culture, and the natural habitat of the endangered animals to maintain the ecological balance.

The park is a perfect tropical escape in the South Pacific to soak in lush scenery and snorkel in the crystalline waters.

The history of American Samoa dates back to 3,000 years ago, making it one of the oldest cultures in all of Polynesia.

Over the centuries, distinct cultural traits emerged and are collectively known as a fa’asamoa, the Samoan way.

In 1984, Bat Preserves Association requested to include American Samoa under the Federal Fish and Wildlife Restoration Act to protect the ancient rainforest and natural habitat of the flying fox.

In 1992, the United States government signed a 50-year lease with the Samoan Village Councils to preserve and protect the tropical rainforests, coral reeds, wildlife, and Samoan culture.

Things To Do In National Park Of American Samoa

Whether you’re up for a hiking adventure or a scenic landscape, the park has something for everyone and here are some must-do things in the park:

Take A Trip To Manu’a Islands

Ta’u Islands was considered a “Sacred Site” by Polynesian people, and now it is one of the most popular attractions in the park.

Located 60-miles east of the Tutuila, the Manu’a Islands comprises the volcanic islands of the Ofu and Olosega and Ta’u.

The islands are thinly populated with Samoan people and provide an excellent opportunity to experience the Samoan culture.

The park has some of the most breathtaking trails, suitable for all ages and ability levels. And whether you want some solitude, enjoy steep panoramic vistas, or view wildlife, there’s a hike for all types of hikers.

Some trails take you through the lush rainforests, and some treks lead to the summits of the volcanic mountains.

Some trails pass through the private properties of the locals and require their permission to pass through.

Thanks to its Homestead Program, visitors can also experience the Samoan culture and lifestyle by living among the Samoan people.

Also, the residents of the villages offer accommodation options for the tourists in the village settings to learn about local traditions, customs, art & craft.

The park is a paradise for bird lovers with its rich birdlife. The park is home to a vast population of sea birds, migrant shorebirds, and many other species native to the rainforests, including tropical doves and pigeons.

Some of the most commonly seen socialites include cardinal wattled honeyeaters and Samoan starling.

The Park can be visited any time of the year, but April till October is the best time to visit because the weather is drier with low humidity levels.

White Sands National Park – Is It Worth Visiting?

Don’t forget to download the park’s map to familiarize yourself with the park’s layout and visually plan your tour.

It is not allowed in this park, but a permit can be obtained from the village’s chief.

Or else, Homestay Lodging is also an excellent alternative to camping, where tourists can stay with local families of Samoan people to learn their lifestyle and unique culture.

The park has a tropical climate with ample precipitation, thanks to its position in the South Pacific near the equator.

The weather is rainy and hot throughout the year, with an average temperature ranging from 28 to 30 degrees Celsius.

October and May are the most hottest and wettest months and temperatures start to cool off from June through September.

Also, the average rainfall is up to 300 inches per year in the highest mountains so make sure to check out current weather on islands before making a vacation plan.

A wide range of accommodation options near the Park caters to different needs and budgets. Here are some best options worth looking into:

The park has no entry fee or reservations and is open all year round for visitors with a bit of explorer’s spirit.

All you have to pay is to get to the park by plane.

Checklist Of things To bring

Here are some essential survival and clothing items you should bring with you for a day of adventure in the park:

How to get to the National Park of American Samoa?

The park is only accessible by airplane from the capital city of Pago Pago, where Hawaiian Airlines operates two flights per week to American Samoa.

How much time Should I Spend in the National Park of American Samoa?

We’d recommend spending at least two weeks exploring all the highlights of the park peacefully and making the most of your time and money spent on an expensive flight. But if you’re on the fence, stay at least for a week.

How should I dress to the National Park of American Samoa?

Dress lightly in comfortable and modest summer clothing, shorts, and comfortable shoes. No revealing, brief-type swimwear is allowed in the park if you like to stay close to the culture.