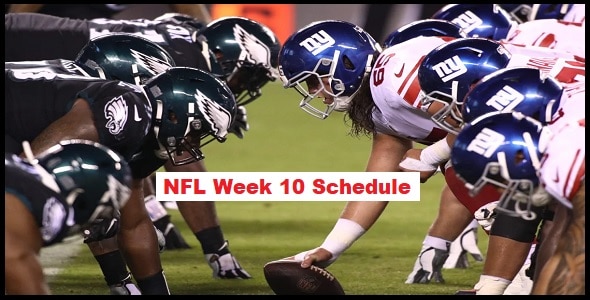 With half of the regular season games played most of the top and bottom teams have a general idea of where they stand. It’s the teams in the middle who are consistently working hard to have a better position as the season comes to an end. Here are all the games of the NFL Week 10 Schedule.

Page Contents show
NFL Week 10 Schedule All Matches Date Wise
Ravens vs Dolphins
Falcons vs Cowboys
Lions vs Steelers
Buccaneers vs Washington
Jaguars vs Colts
Browns vs Patriots
Bills vs Jets
Saints vs Titans
Panthers vs Cardinals
Vikings vs Chargers
Eagles vs Broncos
Seahawks vs Packers
Chiefs vs Raiders
Rams vs 49ers
How to Watch NFL Schedule Week 10?
Conclusion
Frequently Asked Questions
When will NFL Week 10 Schedule start?
How many matches are there in week 10?
Which teams have the strongest presence as week 10 starts?

The following are all the games of the NFL Week 10 Schedule according to their date and times.

So, week 10 starts with a banger of a game between Ravens and Dolphins. While the Dolphins have failed to perform well in this season, the Ravens have been on the top of their game.

Ravens being the stronger side are looking to ace this match as well.

Another interesting game for week 10 as one team has been on the top of their game while another one has started to improve.

While the stats tell a different story, the Falcons fans are waiting to see something special from their team.

The Steelers have played well in the starting few games. However, now they are standing in the middle of the standings table. On the other hand, Lions belong to the bottom of the table.

Let us see what the Lions have to put up on the boards after half of the season has been played.

Another match with a similar story. While the Buccaneers have been performing exceptionally well Washington has been giving their average game so far.

If Washington, belonging to the bottom-middle of the table, is willing to improve their position, they have to win this game.

It is going to be an interesting contest as both teams have been performing similarly in the past weeks. Both teams have to get something good on the table and it is their opportunity to get some.

Yet another game where both teams have been having similar performances in the past weeks. Not only this but they have similar positions in the standings table as well.

It means that this match brings the opportunity for both the teams to maintain a better position and secure their season.

Although the Bills are not the strongest side this season, they are the absolute stronger side in this game. At the same time, the Jets have not been able to put anything good on the table.

So, this match brings an opportunity for Bills to get better on the standings table.

According to the stats of both these teams. Saints can ace the match if they make good use of their defense. On the other hand, the Titans have one of the strongest Rushing in both leagues.

With that being said, Titans have this opportunity to make good use of their offense to put another victory on the board.

If there is one team that has been facing this season so far then it is the Cardinals. Cardinals have been on the top of their game.

While it can be a tough one for the Panthers, they can still fight to get a victory.

From the stars and the previous results of both the teams, one can say that it is going to be a thriller of a game.

With both of the teams striving to get a better position and save their season let us see which one performs well in this game.

For this game, the stats of both teams are almost similar. What else is similar is their performance during the season.

So, this contest will be an amazing presentation of dealing with the game pressure as both teams are equal.

With the stars, this is going to be a tough one for the Seahawks.

The Packers are already on the top of their game and this time they have a game on their home field making it even tougher for the Seahawks to win.

Although Chiefs have some of the best stats among all the league teams, they have been unable to perform well.

So, this game is an opportunity for the Raiders to make good use of their home field and put another victory on the standings table.

The last match for week 10 is going to be an interesting one as the Rams have been playing well this season.

While the Rams are better in stats and performance, the 49ers have the advantage of their home field. With conditions almost leveled up let us see how week 10 closes up.

How to Watch NFL Schedule Week 10?

To watch these games for NFL Week 10 Schedule you can go to the respective streaming channels. Otherwise, the NFL online network is always a great place to watch any of these games.

We hope that you are enjoying this NFL Season so far and we will make sure to keep you up to date with all the interesting facts about the coming games and weeks.

In this way, you will never have to worry about keeping track of things so you can enjoy the NFL season up to its fullest.

When will NFL Week 10 Schedule start?

The NFL Week 10 Schedule starts on Thursday, 11th Nonmember with a game between Ravens and Dolphins. The match is scheduled to be played at 8:20 PM ET.

How many matches are there in week 10?

There are 14 matches in total NFL scheduled for week 10.

Which teams have the strongest presence as week 10 starts?