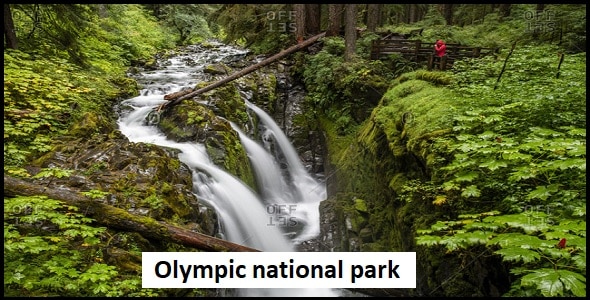 From rocky beaches, rugged trails, gorgeous waterfalls, and mountainous overlooks, Olympic National Park is one of the most desirable travel destinations in America.

In today’s post, we’ll walk you through some of the main attractions of Olympic National Park and share some helpful information about the Park to make the most of your visit. Let’s begin!

The Park has three distinct ecosystems; rugged Pacific Coastline, Glaciated mountains, and Lush temperate. You can walk through the century’s old rainforests, climb one of the tallest peaks as high as 8,000 feet, and take a pleasant stroll along the beaches covered in driftwood, all in one National Park.

Olympic National Park’s first human population consisted of Native Americans, who used the peninsula mainly for hunting, and fishing. Then the first European settlers arrived in the area in the late 1500s. In 1897, the Olympic Peninsula Forests were designated the “Olympic Forest Reservoir” to preserve its majestic beauty.

The Park had initially established an s national monument in 1909, and the area was redesignated as Olympic National Park by President Franklin Roosevelt in 1938. Eventually, in 1976, the Park was declared as an International Reserve. In 1981 it was designated as a World Heritage Site to recognize its outstanding beauty and sheer diversity of wildlife and plants.

Things to do in Olympic National Park

The Hoh Forest is the travelers most favorite destination in Olympic National Park. This lush green wonderland gets 12 feet of rain every year and is famous for its fascinating ecosystem. With mosses and ferns covering every single tree and the surface, Hoh forest is one of the few remaining rainforests of the United States, and walking in the forest gives you the feeling like you’re in a fairy tale. The forest has two short and easy trails, The Hall of Mosses Trail and Spruce Nature Trail, to take you through this outstanding forest and marvel at this stunning wonder of nature.

If you want to go on a mellow hike while enjoying the most incredible views of the Pacific coast mountains, nothing beats a day trip to Hurricane Ridge. You can take an adventurous 18-mile drive up to Hurricane Ridge, and at the top, you’ll find a visitor’s center, gift shops, and multiple hiking trails. This place is a pure delight to visit during Spring and summer when colorful wildflowers bloom atop hillsides, and you can enjoy superb panoramic views of the mountains for miles.

Another prominent attraction of Olympic National Park is Kalaloch, located on the southeast coast. Three national wildlife refuges protect the marine environment and offshore islands. The beach’s coastal waters have provided a haven for thousands of marine species, including coastal birds, seagulls, bald eagles, and tufted puffins. Kalaloch and Ruby Beach have seven beach trails to the ocean from highway 101, all of which provide excellent viewpoints of tide pools, sea stacks, high bluffs, and more. The beach is open all year round and is definitely worth the drive to witness a stunning ocean view.

Lake crescent is an absolute gem in the Olympic National Park that you can’t afford to miss. The glaciers carved this crystal-clear sapphire-colored lake over a span of thousands of years. The lake is encircled by heavily frosted hills and packed with flora and fauna so prolific that you’ll think you are in some classic movie. There are many nooks to settle down for a night beside the lake and wake up to the stunning lakeside vista. If you love fishing, Crescent Lake also provides an ideal habitat for fishing in Spring and Summer, where you can fish some of the best rainbow trout in Western Washington.

No Olympic National Park trip is complete without a hike to Marymere Falls. Just a quick away from Crescent Lake, these impressive 90-foot falls are one of the most beautiful places in the Park. The falls force their way through a gap in the cliff and tumble down through a notch into the forest below. The Marymere Falls trail is 1.7 miles, effortless to hike, making it great for all skill levels.

The best months to visit the Park are July and August, as the weather is mostly sunny, dry, and warm, and most of the popular tourist attractions and trails are open. Summers are also ideal for visiting, hiking, and camp under the stars, as the weather is warm during the day and moderate and mild in the evening.

Olympic National Park is one of the best parks to take a road trip, and having a park’s map with you will help you visually plan your tour by showing the locations of visitor centers, roads and trails, campgrounds, and lodging options in the Park. Click here to download the Park’s map in PDF or visit the official site of nps.gov for more information.

Camping in the Olympic National Park is a unique experience that you’ll never forget. The Park has 12 campgrounds, out of which only Kalaloch, Mora, and Hoh Rain Forest are open in the summers. The campgrounds are available for tents and RVs and have vault toilets and potable water in the area to make your stay more comfortable. You need reservations for camping which you can do via www.recreation.gov.

The weather in Olympic Peninsula is diverse and tends to be unpredictable and variable no matter what the forecast says. Although most of the time, the weather is mild and pleasant, which is why people are drawn to the Park all year round. It’s known as a rainforest, but heavy rainfalls occur only during October through March. It is always good to check the weather forecast and current conditions on the National Service website before the visit.

There are a plethora of excellent and budget-friendly hotels located near Olympic National Park. Here are our top 5picks you can choose from:

To enter Olympic National Park, you’ll have to pay $30 per vehicle (private and non-commercial vehicles), $25 per motorcycle, $15 per person or bicyclist, $75 for a commercial van, $100 for minibus, and $200 for commercial Motorcoach. You can also purchase Olympic National Park Annual pass for $55 one time and can enter the Park for next year completely free. For more information about entry passes, visit the National Service website.

Here are some must-have items you should pack with you while visiting the Olympic National Park:

Can I Camp in Olympic National Park for free?

Yes, there are many free campgrounds and dispersed campsites in Olympic National Park where you can camp for free.

How many days should I Spend in Olympic National Park?

There are countless things to do and see in Olympic National Park, which means you need to spend a minimum of 2-3 days to explore all the major attractions briefly.

Are there any dangerous animals in Olympic National Park?

There are some potentially dangerous animals in the Park, such as black bears, mountain goats, Roosevelt Elk, and other large mammals.