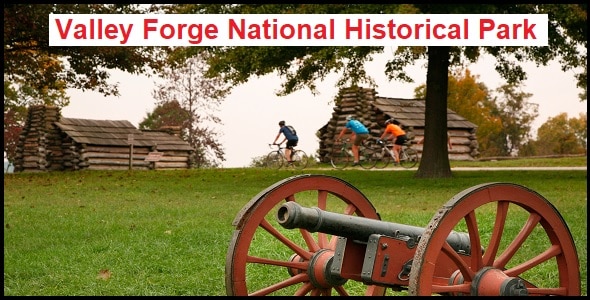 If you’re considering a trip to this Park and wondering if the park is worth it, you have found the right guide.

In this guide, we’ll share the best things to do in the park, give valuable tips, including the best time to visit, where to stay, what to bring, and answer some frequently asked questions.

Valley Forge Park was the encampment site of the Continental Army at the time of the winter of 1777-1778.

Extending over 3,500 acres of rolling hills, meadows, and woodlands, the park is a home to diverse wildlife and plants.

Valley Forge is an ideal destination for runners, bicyclists, and history enthusiasts.

More than 1.2 million people visit the park to learn about the nation’s revolutionary history and to enjoy plenty of recreational facilities.

This Park played a significant role in the Revolutionary War. In 1777, General George Washington and his 12,000 troops of the Continental Army were encamped at Valley Forge. The site was selected because of its strategic position.

During the notorious winter of 1777, the troops in the encampment suffered horribly from sickness and cold.

Still, they overcame the adversity during extraordinary times and triumphed over Great Britain, its largest military power.

In 1893, the Valley Forge was designated as the first state park of Pennsylvania by VFPC to preserve the natural environment and maintain a public site on which General Washington’s army encamped at the Valley Forge.

Valley Forge was designated a U.S National Historic Landmark and listed in the National Register of Historic Places in 1966.

In 1976, the state gifted the park to the country to celebrate the bicentennial, and Valley Forge National Historical Park officially became Pennsylvania’s first state park.

Things to do in the park

Here are the top 5 best things to do in this Park:

The encampment tour is the main reason why millions of visitors flock to the this Park every year.

The history buffs will be thrilled to see the actual location where George Washington and his troops resided during the revolutionary war.

Visitors can take a self-guided tour throughout the park hitting all the major historical monuments and important sites.

The tour can take up to 20 minutes to several hours, depending on how often you stop along the way.

The National Memorial Arch is another famous site that’s not to be missed.

In 1907, the Valley Forge National Park Commission decided to erect an arch memorializing the sacrifices of General George Washington and his devoted troops at Valley Forge during the American Revolution.

Quarters of the former president is another highlight of the park. Visitors can tour the two-story house used by Washington during the revolutionary war.

At the time of the war, the house was owned by Isaac Potts, and Washington transformed it into his headquarters. The headquarters are still furnished to look precisely what they used to be when Washington resided here.

This epic church is another must-see site in the park. They Built the ChapelChapel between 1903 to 1917 in honor of General George Washington and soldiers of the continental army.

The remarkable bell tower next to the ChapelChapel is home to “Justice Bell,” a symbol of the women’s suffrage movement from 1915 to 1920.

The ChapelChapel hosts a variety of reenactments, concerts, and other special events for visitors throughout the year.

The Park features many recreated cabins and similar structures used by soldiers during the encampment.

And also, numerous historic buildings are still in their original form and have not been refurbished.

After the designation of Valley Forge State Park in 1940, more cabins and huts were constructed, many of which were rebuilt again in 1961.

No matter what time of the year it is, this Park always offers much.

September to October and April to May are the best time to visit the park in terms of weather and crowds.

These months bring the most pleasant temperatures and offer fewer crowds.

Download the map of this park from NPS Website to get an idea of how things are in and around the park, including the key park sites, hikes, and Encampment Tour route.

This Park does not allow camping to preserve the original encampment site and maintain the park’s natural beauty.

You can probably find decent campgrounds near the park to relax and enjoy. To browse the camping spots nearby, click here.

The Park has a continental climate, and the weather is pretty favorable throughout the year with an average temperature of 52°F.

Summers are hot and humid, and winters are cold and moist. June is the hottest month of the year.

Spring and Autumn are primarily mild but can swing between warm and cold temperatures. Make sure to check out the latest weather forecast.

There are many hotels near the Park that make it easy to round out a trip to the park.

Here are some top-rated recommendations from TripAdvisor:

The entrance to the Park is completely free. But, visitors need to pay for 90-minute guided Trolly tour.

You can purchase tickets from the Visitor Center at Valley Forge.

Checklist for Things to Pack

Here are a few necessities you must pack at the time of planning a trip to Valley Forge National Historical Park:

Is Valley Forge National Historical Park worth a Visit?

Besides its historical significance, the park features a stunning landscape with commendable views making it an ideal spot to enjoy picnics, photography, and other outdoor activities.

How much time do I need in Valley Forge National Historical Park?

To get the best experience, we’d recommend spending 2-3 days to have enough time to explore the battlefield and the surrounding town and learn unique things about history.

Can I go for a picnic at Gettysburg National Military Park?

Yes, the park has three designated areas for a picnic that provide picnic tables, trash receptacles, restrooms, and other facilities.