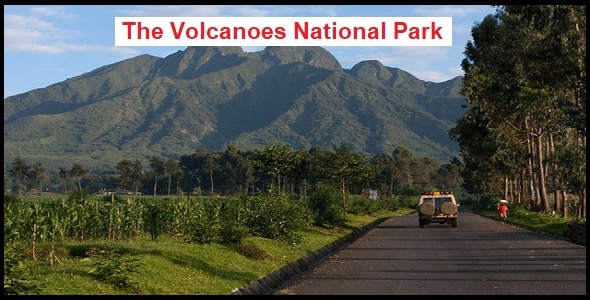 Volcanoes National Park is an incredible travel destination that offers a fantastic variety of things to do.

So if you have never heard of this gem, we’d recommend planning a visit ASAP.

In this article, we’ll share everything you need to know for planning a visit to this hidden gem. Let’s get started!

Volcanoes National Park is one of Africa’s oldest and most visited national parks.

Located in the northwestern part of Rwanda, the Park is home to the endangered mountain gorillas, golden monkeys, and 200 species of colorful birds residing on the slopes of the Virunga rain forest.

Volcanoes National Park shelters five of the eight Great Virunga Mountains and spreads for about 160 km covered in rain forest and bamboo.

Besides volcanoes, the park is home to Musanze Caves– a series of lava tubes formed 62 million years ago.

This Park offers a variety of activities to engage in, such as gorilla trekking, mountain biking, wildlife watching, Cave tours, and cultural encounters.

This makes it one of the top-visited touristed destinations in Rwanda.

Joshua Tree National Park – Everything You Need To Know

Indiana Dunes National Park – Why It’s One Of The Best?

Initially, the park was a small area around Karisimbi, Mikeno, and Visoke volcanoes with nothing extraordinary about it.

In 1925, it was designated as the National Park to protect the Mountain gorillas, which were at the brink of extinction.

Later in 1960, the Park was divided between Rwanda and the DRC following their gain of independence, reducing the size of the Park to half and hence leading to the creation of the Virunga National Park in the Democratic Republic of Congo.

In 1967, the famous zoologist Dian Fossey came to research gorillas and set up the Karisoke Research Station in the Park.

Fossey was brutally murdered in 1985 by one of the poachers she had spent her life fighting against.

In the early 1990s, Volcanoes National Park became a battlefield of the Rwandan Civil War.

This had a significant impact on the lives of the people living in Rwanda, and tourism also got severely affected.

In 2005, the Rwandan Government took the initiative to revive tourism and introduced the baby naming ceremony for the baby gorillas being born in the Park.

The activity turned out to be successful, and now it happens annually involving both locals and tourists.

Things To Do In Volcanoes National Park

This Park is known as the hub of some of the best tourist activities in Rwanda. Here are the top five must-do things in the Park:

Mountain gorilla trekking tops every tourist’s bucket list who visit the Volcanos National Park. The Park is home to 18 gorilla families, 12 of which are open for trekking.

Visitors can search for them and spend time with them in their natural habitat.

A close encounter with the most endangered mountain gorillas with whom we share 98% of the DNA is one of the most memorable and purely life-changing experiences one can have in their life.

The second most sought-after activity in the Park is golden monkey trekking that attracts many visitors to the Park.

Golden monkeys are one of the gorgeous monkey species with bright reddish-gold fur and snub-shaped nose, and a glimpse of them is considered a wonderful lifetime experience.

There are two families of golden monkeys in the Park available for trekking.

Visitors can spend one hour with them in their natural habitat and watch their lifestyle, and habits and take pictures with them.

In addition to wildlife, the park is home to three extinct volcanoes, making mountain climbing one of the third most popular activities to do in the Park.

Mount Karisimbi is the highest and most hiked volcano among the Virunga Volcanoes.

Hike to the Karisimbi is strenuous and takes two days to complete; But, it feels nothing when you reach the top and see the stunning views of other Virunga Volcanoes, rolling hills, and local communities of Rwanda.

The tour to the park is undeniably incomplete with a tour to Musanze Caves.

Situated in the Park’s heart, in northwest Rwanda, Musanze Caves were formed by the volcanic eruption decades ago.

The cave ceiling is studded with bats, and the floor is paved for easy movement.

An experienced guide will take you into the caves’ dark interior and tell you about the history of caves and how they were formed.

Rwanda has a colorful and rich culture, so make sure to take on a cultural tour at one of the cultural centers.

Also, the Park has Iby’iwachu cultural center where you can learn about the Rwandan culture, see dance performances by Rwanda Troupe and interact with locals.

The best time to visit this park is during the dry season; or preferably from June to September and December to January.

During these months, roads and gorilla trekking trails are easily accessible.

To make your visit safer and more enjoyable, make sure to download and print the dynamic and static map of Volcanoes National Park displaying all the roads, trails, and entry and exit points.

There are a variety of lodging facilities within and near the Park. Here are our top five recommendations you can choose from:

This Park does not have overnight camping but, several lodging options are available within a few kilometers of Kinigi that cater to all budgets and needs.

The climate of this park is wet and cold because of its high altitude.

The temperature remains around 61°F during the day and 42°F at night, and though it rains a lot throughout the year, there’s a short dry season from June to August.

September to May is the wettest season with plenty of rain, so don’t forget to bring waterproof and warm clothing.

The entry fee for the park depends on what activity you intend to do at the Park.

You can pay it through Rwanda Development Board or tour companies offering Safaris to Rwanda.

The entry fee of Gorilla trekking permit is $1500 per person; Golden monkey trekking is $100 for foreigners, $65 for foreign residents, $65 for Rwandan/EAC Citizens, and $80 for the EAC foreign citizens.

The permit for all hiking activities costs $1500. For detailed information about entry fees, click here.

Checklist Of Things to Pack

Here are some essentials that must be on your packing list for the Park Safari:

Yes, the Park is entirely safe for tourists, and thousands of visitors come each year to experience close encounters with one of the calmest creatures in the world.

How much time do I need in Volcanoes National Park?

It entirely depends on how you want to spend your time in the Park. If you’re going to walk around and see 2-3 places briefly, it takes about 40-60 minutes to walk the entire trail. But if you’re interested in gorilla trekking and volcano climbing, we’d recommend spending a day.

How many gorillas are there in Volcanoes National Park?

The Park is home to 340 mountain gorillas and 2500 to 3500 golden monkeys residing on the slopes of the Virunga rain forest.